Patience Is A Virtue

An update on the rescue dog…he isn’t working out.

At orientation we explained how we do things in the house and that some things are to be done OUTSIDE the house. But there have been a number of accidents. We gave him a verbal warning. The furniture is tattered as he is finding his teeth go well with our couch. We gave him a written verbal warning but he didn’t seem to understand. He still doesn’t like the leash. Picture shows him with leash on but retreating to his crate – which he goes into with no issues – and his toys barricaded in front of him so we can’t get to him. That was a write up for insubordination! 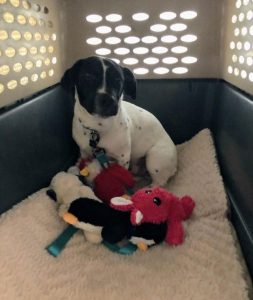 We told him what to do but he isn’t doing it. We wrote him up several times. I guess we need to fire him.

At this point you chuckle as you remark they can’t fire the dog.

No, but we could tie him to a tree and abandon him like what happened to him at age 8 weeks. He has a long way to go but he is getting better – slowly – and we have no intention of letting him go.

Of course, if he was an employee we would have walked him to the door already. But he IS getting better – soooo – maybe we continue to demonstrate patience and love and he will continue to develop just like an employee might.

We treat employees worse than we treat dogs sometimes.

This entry was posted on Friday, February 21st, 2020 at 7:51 pm and is filed under Hiring, Leadership. You can follow any responses to this entry through the RSS 2.0 feed. Both comments and pings are currently closed.

"Wally's presentation was excellent, both as to presentation style and content. He ranks as one of the best educational or training presenters I have experienced. Frankly, HE IS THE BEST. "